Gasteria excelsa is a succulent plant that belongs to the family Asphodelaceae. This particular species of gasteria was first discovered in 1859 by James Charleson and its habitat ranges from the Eastern Cape Province in South Africa to KwaZulu-Natal.

Gasteria excelsa is fairly easy to care for, but they do need bright light in order to thrive. If you want gasterias as house plants or garden ornamentals, be sure not to overwater them!

Gasteria excelsa is great for people who want to add something green to their space but don’t have much time or room for gardening!

This article will teach you about gasteria excelsa, a succulent plant with long and thin leaves. We will discuss the origins of this plant and how it can be grown in your home or office. 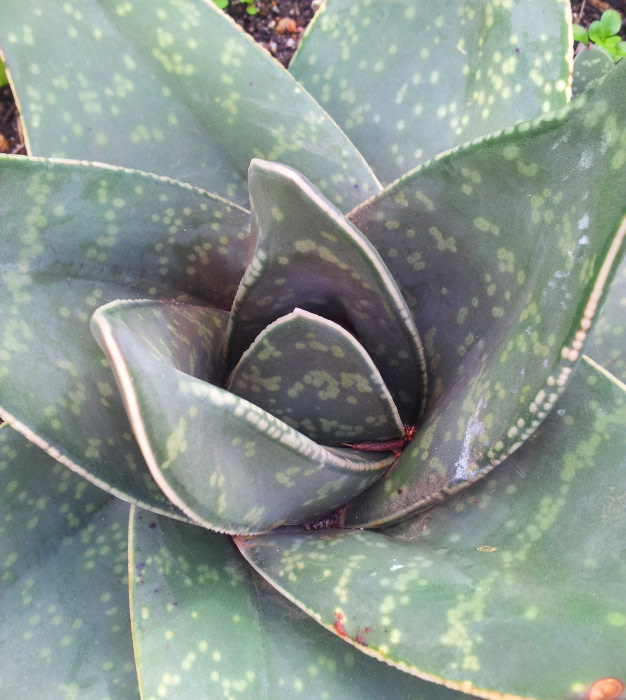 Gasteria excelsa is native to South Africa. It has a wide distribution in the Eastern Cape, Free State, and KwaZulu-Natal provinces of South Africa. This succulent plant grows well in hot climates with mild winters that are dry for several months each year. Gasterias can be planted into small pots or large gardens.

They are very hardy plants but can be susceptible to fungal diseases if they are watered too frequently or have poor drainage, so it is important that the soil should not retain water for long periods of time after watering.

It forms rosettes of broad, rigid leaves that are dark green with white spots and teeth along the margins while young but become plain green or reddish-green as they mature. The species produces short inflorescences bearing red flowers in midwinter through spring. It has been in cultivation for centuries.

Gasteria excelsa seeds can be sown much like other members of the Agavaceae. Seeds are typically scarified and then soaked in very hot water before being planted into a well-draining medium such as sandy soil or vermiculite, with some slow-release fertilizer added to keep it moist but not too wet.

The seedlings should be kept in a humid environment with good air circulation to prevent fungal infections.

Gasteria excelsa can also be propagated through the division of offsets, usually taken from the base or lower stems where leaves are produced. The plant may not tolerate disturbance by division as well as other methods but it is an easy way to increase your collection if you have a specimen that’s been growing well for a while.

Offsets can also be removed from the parent plant and grown in their own containers to create a clump, or they may be allowed to grow into one large colony if space is not an issue.

Gasteria excelsa care in the home and garden is relatively straightforward once you’ve become used to growing succulents.

As with most members of Agavaceae, Gasteria requires porous soil that drains quickly after it’s been watered, so make sure any container has adequate drainage holes at the bottom.

Gasteria excelsa is very adaptable and can do well in a range of lighting conditions, making it easy to accommodate within the home. However, its growth rate will be significantly slower under low light than with high or medium levels of lighting.

Gasteria excelsa will do well in a south- or west-facing window. In warmer climates, this plant does best on an east-, north-, or shaded patio, as it can tolerate some sun but not very hot direct sunlight for prolonged periods of time.

For optimal growth of this plant, also incorporate limestone chips into the soil to provide necessary calcium as it absorbs water from roots.

If you are growing your Gasteria in a container, choose one that has drainage holes on the bottom and place gravel over them before adding soil to prevent roots from sitting in water.

Gasteria excelsa is succulent and must be watered appropriately to survive in the long run. During its active growing period, it should be given an ample amount of water weekly or biweekly depending on how much light your plant receives.

However, when not actively growing (during wintertime), this plant requires very little watering— only enough to keep the soil from drying completely.

It is also important to ensure that the plant does not sit in water, as this can cause root rot and kill your plant over time.

Gasteria excelsa should be watered with rainwater or distilled water if possible; avoid using softened tap water on these plants because it contains harmful salts that will build up in the soil over time and eventually kill the plant.

Fertilizer is unnecessary for Gasteria excelsa, as this plant does not require extra nutrients to grow.

However, if you would like to fertilize your plant during its active growing season (springtime), an application of a balanced 20-20-20 diluted fertilizer once or twice monthly will do the trick without causing any harm.

Gasteria excelsa is fairly cold-tolerant and can withstand temperatures as low as 40 degrees Fahrenheit (but not freezing).

If you are growing your Gasteria indoors, it will thrive best if kept in an area that receives bright light throughout the year.

If you are growing your Gasteria indoors, it will do best if kept near a humidifier or placed on trays of moistened pebbles to help raise the ambient moisture level under its leaves.

On the other hand, when grown outdoors during warm weather, make sure that this plant is not exposed to humidity during the early morning, as this can lead to rot.

Pruning is not necessary for Gasteria excelsa.

However, if you do want to prune your plant in order to create a nice centerpiece or accent piece in an arrangement, it can be done at any time of the year. Just remember that this will reduce its growth rate.

It is recommended to repot your Gasteria excelsa every two years in the springtime.

This plant will thrive best if it has a medium-sized pot with adequate drainage holes, which you can frequently check by sticking your finger inside and checking its soil moistness levels.

Gasteria excelsa is a subtropical plant and will not be growing in the wintertime, so it’s important to give this houseplant a rest period.

This can be done by placing your Gasteria in an area that receives cool or indirect sunlight with temperatures ranging from 60-65 degrees Fahrenheit during autumn until springtime when you will resume watering the plant.

Gasteria excelsa is a succulent that does not bloom readily indoors.

However, if you are growing your Gasteria in bright light and it experiences adequate warmth (spring-summertime), this plant may produce small white flowers during the fall months.

These blooms do not have any scent or fragrance but can be very attractive and add a nice accent to your plant.

If you are growing your Gasteria indoors, it will thrive best if kept in an area that receives bright light throughout the year.

Although the sap of Gasteria excelsa may irritate your skin if it is exposed to direct contact, this plant is not considered toxic.

However, you should still wear gloves when handling this houseplant or wash your hands thoroughly after touching it so as to avoid any irritation that might arise due to its sap. As a precautionary measure, also keep this plant away from children or pets.

Gasteria excelsa is hardy to USDA plant hardiness zones of 11 and 12.

Gasteria excelsa is not prone to insect infestation or plant diseases.

However, there are a few problems you should be aware of when growing this houseplant.

For example, Gasteria excelsa can suffer from mealybugs if it’s grown indoors in humid conditions that support these pests’ development; other insects that may attack your plant include scale insects and spider mites.

Gasteria excelsa is a non-flowering houseplant that prefers bright light and milder climates.

This plant also thrives best if it has proper humidity levels, as well as adequate drainage holes in its potting medium.

It does not require much maintenance or pruning, but should be allowed to rest during the wintertime.