Echeveria ruffles are a beautiful, echeveria hybrid with large, textured leaves that have an elegant shape. The echeveria’s flowers bloom in the springtime and last throughout the summer. Echeverias grow best in warm climates but can be grown indoors if provided with enough light.

They a genus of flowering plants in the Crassulaceae family. The echeveria ruffles are a type of echeveria that have thick leaves and resemble ruffled feathers. They can be found in shades from deep burgundy to pale green and every shade in between!

Echeveria ruffles come from Mexico. It has leaves with a gorgeous rosette shape and pinkish color sometimes, which gives the plant a unique look among other echeverias. Echeveria ruffles has leaves that are wider in the center, and they narrow down towards the tips. The plant could grow up to 15 cm tall when it’s fully grown.

The genus is native to Mexico, with one species in Guatemala. The plants are usually found growing on rocks or among gravel at higher elevations.

The plants are identified by their thick, stiff leaves with saw-like marginal teeth. Some species have an epidermis that gives them a waxy feel when rubbed between the fingers. The flowers are large and showy in coloration of reds, purples, or yellows to white depending on species. 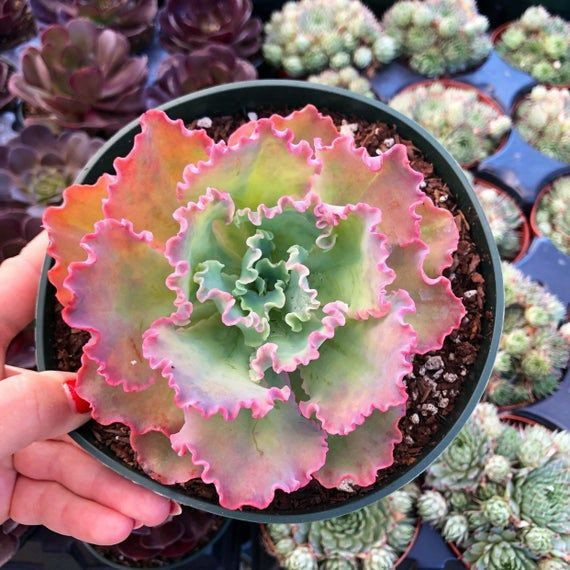 Echeverias are easily propagated by division, offsets, or leaf cuttings. The small offset can be left to form a cluster of plants or removed and transplanted. If you remove the offset early enough, it will have formed roots along its stem which means that after transplanting, it won’t require an additional root stimulator. If you choose to leave the offset and transplant it as a whole plant (which usually results in lost roots), you can root its leaves, instead.

You should never propagate echeveria by seed because they either won’t sprout or will give plants with weak genetics. However, if you really want to try your luck at growing echeveria from seed, you can collect their seeds and treat them the same way as succulents.

Echeveria ruffles are a little more light-sensitive than most echeverias. It can tolerate bright sun, but it will grow thicker and produce larger leaves if given some shade during the hottest part of the day (around noon). It also does better with some protection from strong winds.

As with most echeverias, ruffles do well in shallow pots. Since the plant’s roots are relatively fine and not very strong, repotting should only be done when necessary (when there are signs of root rot or an overall lack of vigor). A peat-based potting mix is generally recommended for this species.

Ruffles is a relatively drought-resistant plant, but it still needs regular watering. The soil should dry out between waterings and the pot shouldn’t sit in collected water (which can lead to root rot). It is best to use rainwater for this species, if possible.

Echeverias are not heavy feeders, so fertilizing is only necessary every couple of months. It’s best to use an organic fertilizer with a low nitrogen content (i.e., something high in phosphorus and potassium).

Ruffles are usually grown indoors, but it can also handle low temperatures (down to around 40°F). Over the winter months, it’s important to keep this species in a cool room and avoid exposing it to drafts.

This succulent is more tolerant of low humidity than most echeverias, but it still needs to be kept away from dry environments. If the leaves are limp or have brown tips, this means that there’s not enough moisture in the air.

Ruffles don’t grow much after it flowers, so there’s not really any need for pruning. However, if the tips are cut back regularly (when they get too long), this plant will branch out more and produce larger leaves.

Repotting should only be performed when necessary. If the pot is too small, there are signs of root rot, or an overall lack of vigor, it’s probably time to repot this plant. A peat-based potting mix is generally recommended.

Ruffles don’t go totally dormant like some echeverias, but it does need to be kept relatively cool and dry during the winter months. If exposed to temperatures that are too warm or humidity levels that are too high, this plant will rot quickly.

Echeveria ruffles don’t produce flowers often, but when it does, they are relatively large and pink with red tips. The flower stalks grow up to about 12 inches tall (30cm). They look best when the plant grows out several of them at once.

This echeveria is relatively slow-growing, but it makes up for this with its interesting leaves. It produces thick, green rosettes that are edged in red and seem to grow like waves or ruffles (hence the common name).

Echeveria ruffles are safe to handle and not poisonous, but it does contain oxalates. This means that the leaves will irritate the skin (causing itching or burning) if they come into contact with them for too long.

Echeveria ruffles are hardy to USDA zone 11. This means that it needs a minimum of 30°F (0°C) and can’t tolerate frost or high humidity levels.

Echeveria ruffles is usually pretty pest-resistant, but it can sometimes be attacked by mealybugs. If the leaves are eaten up too much, they tend to lose their color and become limp.

Ruffles are a relatively easy succulent that can be grown indoors or outdoors. It’s slow-growing but does well in shallow pots and has interesting leaves with red edges. It’s best to water this plant about once every two weeks, but the soil should never be allowed to become too soggy. If it is moved outside during the summer months, ruffles must still be kept out of direct sunlight.