Echeveria prolifica is a succulent plant that thrives in pots. It has beautiful, fleshy leaves and can be found in many shades of green. It’s important to know how echeveria prolifica likes its environment before you bring it into your home or office space. 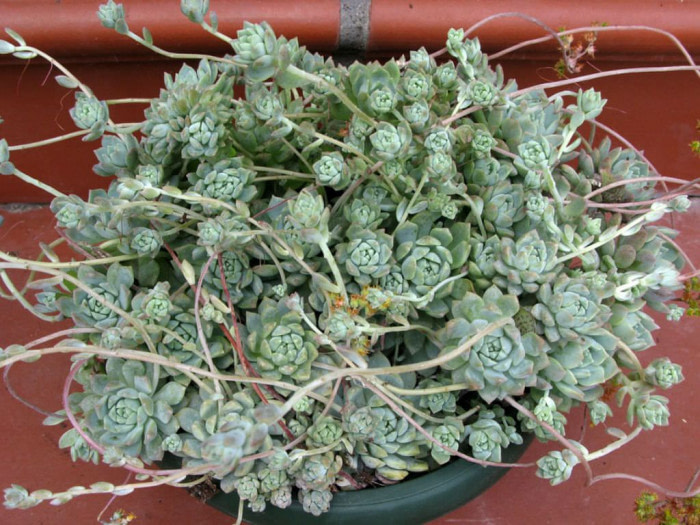 Echeveria prolifica is a species of flowering plant in the stonecrop family Crassulaceae. The small, succulent grows on limestone cliffs and rocks with bright light exposure.

It was first found as a cultivar from Mexico at the end of the 18th century. It appears to be closely related to Echeveria secunda and Echeveria pulvinata

It is a small, slow-growing, mat or clump-forming succulent perennial with fleshy green leaves up to 15 centimeters long and about one wide. The rosettes of thick blue-green leaves are held on short stems from which the flowers arise in summer through fall. Pale yellow blossoms are borne in clusters on thin, wiry stems.

Echeveria Prolifica is among the easiest of all succulents to propagate, which makes them extremely popular with both indoor and outdoor gardeners. Some growers choose to share young or small specimens with friends while others enjoy propagating their own large collection.

There are numerous ways that you can reproduce echeveria, but some methods work better than others. Let’s look at some of the more popular echeveria propagation methods and find out which one will work best for this plant.

The best way to propagate is through cuttings. Echeveria will readily produce offsets, which are small clones of the parent plant. An offset can be removed when it’s at least half the size of its parent and has several roots growing from the base. Cut off a piece that includes some leaves and then replant in moist potting soil. Keep warm and moist, but not wet or soggy.

Echeveria can also be propagated through seed if the plants are cross-pollinated by a pollinator such as bees. The seeds will take several weeks to germinate and produce young plants that closely resemble their parents in most cases. It is also possible to harvest seeds from the flowers of some species, which are usually yellow or orange.

Echeveria can also be propagated using leaf cuttings, but this method is not recommended because echeveria leaves do not produce roots easily and young plants may take longer to mature. It’s best to invest your time in echeveria propagation through cuttings.

It’s important to understand your climate, as this can help you determine how much water will be required for the plant. Generally speaking, the more rainfall a region gets in the summer months is where they are native to which means less attention needs to be paid to them by gardeners there. The sunnier the region, the more attention you’ll need to pay.

Echeveria prolifica prefers bright, filtered sunlight. If possible, place the pot near a window facing southwest or west to avoid direct afternoon sun during the summer months. Although you can grow Echeveria prolifica in shadier spots if necessary, keep an eye on its leaves for signs of scorching from too much light exposure.

In terms of potting mix, a standard cactus potting soil with perlite or sand added will do. If you’re growing the plant in a half whiskey barrel planter, then regular garden loam and compost can be used instead.

Just don’t use regular garden soil as it would compact around the roots making watering difficult which could lead to root rot.

As for pot size, it’s best if the container is deep and at least 12 inches wide. Tall pots just won’t work because the plant grows taller than its width over time which makes watering difficult to reach into a small opening in the planter. That said, echeveria prolifica also does fine in smaller pots. Just expect the plant to take longer before it flowers, about six years or so if you’re patient.

After the potting mix is added, lightly shake the container from side to side and tap on its base until no air pockets remain, then fill halfway with gravel for drainage purposes.

Water your echeveria prolifica when the top inch of soil feels dry. If you have a pot with drainage holes, then it’s best to avoid watering altogether unless there is standing water in the container for more than four hours.

If you choose to add gravel or broken pots at the bottom of a planted container without drainage holes, then water can be added once the soil is dry. If you pour directly over the top of gravel without stopping, then there won’t be any puddles after watering which helps prevent root rot.

Echeveria prolifica doesn’t require much fertilizer. A balanced, slow-release 20-20-20 should be sufficient for indoor containers during the growing season while high nitrogen (30%) liquid fertilizer can be applied monthly once the plant flowers to keep it in bloom.

When adding water or any type of fertilizer, avoid getting the leaves wet because it can lead to rot or leaf drop.

Echeveria prolifica doesn’t do well in extreme temperatures. It likes average indoor warmth during the day but not if it’s extremely hot or cold while a cooler night temperature of 55-60 degrees Fahrenheit is best for flowering and growing new leaves.

Houseplants can be kept outside on warm days as long as they aren’t exposed to direct sunlight and can’t be moved back indoors until nighttime. Just don’t leave them outside overnight as temperatures below 45 degrees Fahrenheit may kill the plant or severely damage its leaves, leaving unsightly holes.

If you live in a warmer climate, then this echeveria will do well if kept outdoors during the summer months as long as it isn’t exposed to full sun. Just avoid frequent watering which can lead to root rot and be careful that it doesn’t get too dry.

Echeveria prolifica is a succulent and it doesn’t like humidity. If you’re growing the plant in an enclosed container indoors, then be sure to give it plenty of ventilation while avoiding overwatering which can cause root rot or fungal disease that looks similar to black spots on its leaves.

If outdoors, simply keep this echeveria in a container that allows for good drainage and ventilation while avoiding overwatering which can cause root rot.

If you’re growing your echeveria prolifica indoors, then it’s best to keep the humidity low, so use air conditioning or fans if necessary especially during hot summer months when humidity is high around plants that attract spider mites.

Outdoors, keep the humidity low by avoiding excess watering and spraying water below leaves if necessary. This will prevent any issues with fungus or pests that can attack echeveria plants, especially during hot summer months when spider mites are more likely to infest as temperatures rise.

The best humidity range is between 35-45% with occasional misting in between waterings.

Pruning isn’t necessary for echeveria prolifica if you want to keep the plant looking natural. If there are dead leaves or flowers on its stem, then simply remove them by hand and don’t worry about it because no pruning is required during the growing season.

If your container has too many crowded stems that make it difficult to water, then you can remove some of the bottom leaves as long as it doesn’t disrupt its appearance.

Remove any dead stems by cutting them with a pair of sharp pruning shears or scissors before placing them back in direct sunlight for up to 20 minutes every couple of weeks during the growing season.

If you see roots growing out of the bottom drainage holes, then it’s time to repot your echeveria prolifica plant. If you don’t have a pot with good drainage or are simply looking for more room in its current container, then this is an ideal opportunity to move up into a bigger one that allows space for new growth while keeping the stem intact.

If you’re transferring your echeveria to a bigger pot, then use one that is at least an inch or two wider than its current container with good drainage holes on the bottom for water to flow through easily while allowing proper room for new growth.

Echeveria prolifica begins to show signs of dormancy in colder climates during late fall and early winter when the plant is likely to go into a state of slow growth. However, you can keep it indoors where temperatures are usually warmer so this echeveria will maintain its regular appearance without any change or damage from cold weather.

If you want your echeveria to flower, then it’s best to wait until around mid-summer when the plant is in full growth before putting it outside where sunlight can increase its chances of blooming. It will need a lot of light and warmth once flowering commences, so place back into direct sunlight as much as possible while removing any dead flowers as they appear.

Echeveria prolifica doesn’t have a strong fragrance but it does give off an aroma that smells like fresh straw and hay when leaves are crushed or broken which is noticeable throughout the summer months. If grown indoors, you can allow some of its stems to dry out between waterings so its leaves will fall off easily to release the fragrance.

Echeveria prolifica is one of the slowest growing echeverias that you can purchase. It grows so slowly, in fact, it’s considered rare and difficult to find at most nurseries unless pre-purchased, months before planting season starts which makes its price increase per plant compared with other varieties.

Echeveria prolifica is non-toxic to both humans and pets. It’s a safe option for those who want to add more plants indoors without worrying about the health of anyone around them so it’s ideal for families with small children or animals that need their own plant space as well.

USDA hardiness zones for echeveria prolifica are between USDA zone 11 and 12, meaning it can withstand temperatures anywhere from 0-20 degrees Fahrenheit.

Echeveria prolifica is relatively disease-free compared with other echeverias due to the dense formation of its leaves. It’s also pest resistant which reduces the risk for infection or infestation that can kill your plant if not controlled by proper treatment methods.

Echeveria prolifica is a slow-growing echeveria that’s perfect for those who want to add greenery indoors without worrying about its growth rate. It requires little maintenance other than occasional pruning, repotting when needed, and regular watering while keeping in direct sunlight during the summer months which are all very simple tasks.

It’s non-toxic to both humans and animals so you don’t have to worry about anything getting sick from its presence which is a huge plus for those who want more plants indoors. It’s also one of the only echeverias that can be grown outdoors in colder climates thanks to its hardiness levels although it requires full sunlight throughout the year.