A conophyte is a type of succulent plant that has translucent leaves, and conophytum pellucidum is one of the most famous conophytes. You may be wondering what exactly these plants are; Conophytum pellucidum is very unique because they have two different types of leaves on each plant – one leaf type absorbs water and nutrients from the soil while the other reflects light to help photosynthesis.

This conophyte is translucent, with a conical cap. It has narrow leaves which are green on the underside and maroon to brown on the top side. The flower stalk can grow up to 6 inches tall, bearing two or three flowers at its apex in late spring. 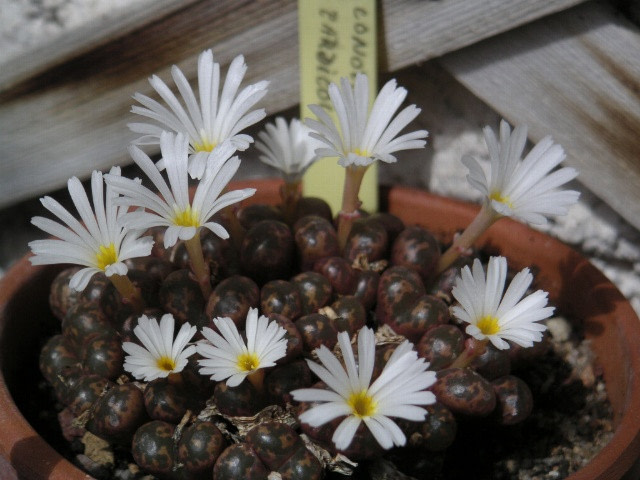 Conophytum pellucidum are small plants with thick leaves and a swollen root system. Their flowers have five petals, which can be white or yellow in color. They grow well in rock gardens because they prefer the sun but do not like to get too warm.

This species is one of many rare succulents that are only found in the wild within a very small certain region, but nothing else is known about its habitat or distribution.

Conophytum pellucidum is propagated from offsets that grow from the base of the plant.

The offsets are removed, with care to keep the “neck” intact. The cutting is then set in the sand until it forms a callus over the cut-end of the offset, after which it is potted up in cactus soil mixed with sand.

This method is preferred for gardeners with greenhouses, or who can provide the plant with warm conditions to promote growth.

It is also possible to allow the offset to form roots while still attached to the main plant, but this method takes much longer and must be done in a mostly shaded area, as direct sunlight will kill newly-rooted offsets.

Conophytum pellucidum needs well-draining soil, preferably in an area with lots of morning sunlight. Do not water the plants after 6 pm so they have time to dry before night.

Conophytum pellucidum is considered to be a shade-loving plant that can survive in full sun if it has an ideal location. The soil should drain well, but the plants are generally tolerant of moist conditions as long as they do not stay wet for prolonged periods.

Conophytum pellucidum needs well-draining soil. Soilless potting mixes are usually the best since they will retain moisture but not hold onto it too tightly. They also deny conophytums any opportunity to sit in water for extended periods of time during watering cycles. It is very important that the container has drainage holes since the soil mix will tend to retain water.

If it does not have these outcrops for excess moisture to drain through, you run the risk of allowing your plant to sit in water and drown itself.

Watering is probably the most difficult topic in growing Conophytums. As with many other succulent plants, they do best if watered only when dry and require extremely well-draining soil to prevent rot. However, not watering enough can cause numerous problems as well: shriveled and brittle leaves, loss of turgor leading to decreased size and loss of spines, and ultimately death.

Conophytums are winter growers and tend to go somewhat dormant during the summer months, so they don’t require as much water in summer as they do in fall, winter, and spring. Some species such as Conophytum ficiforme can be active into late autumn/early winter, while others such as Conophytum truncatum remain somewhat active until summer.

Watering should be kept to a minimum from mid-summer, allowing the soil to dry out slightly between waterings. In late autumn or early winter when the plant begins growing again, begin applying water more frequently and with greater volume. This helps encourage the root system to grow new basal shoots.

Conophytums only need to be watered every 2-3 weeks during their winter growing cycle, and more frequently (daily) if kept under moderately bright conditions (such as on a windowsill). Under low light conditions, watering should be reduced further. It is generally safe to water once per week or less.

Fertilizer should be applied every 15 days with a diluted amount.

Be careful not to over-fertilize, as this can burn the plant’s roots and lead to its death.

This plant can tolerate cold temperatures but should be kept away from freezing temperatures. The plant can survive snow and frost if it is covered by soil or snow during the winter. The ideal temperature range is 5-15 degrees Celsius.

Although this plant is capable of withstanding humidity, it may benefit from misting or fogging. The ideal humidity range is 40-80%.

Trimming is necessary to keep plants looking their best and most importantly to increase airflow. This buildup of dead material can harbor disease, rot, give insects a place to overwinter, create the ideal environment for pests, etc. If you are growing conophytum in rock crevices or grids that are difficult for you to reach then it is a good idea to remove dead material from the rock as well as the plant.

This should be your first step in spring as soon as you notice growth starting, but it can be done anytime that you want to give your plants a fresher appearance.

Trim off any dead leaves or stems, shorten old ones and cut back any fat or leggy growth.

Conophytums generally prefer to be repotted every year. The conophytum are shallow rooted, so the soil dries quickly, especially if you water often. If you don’t want to wait for them to make new roots at the surface of the potting mix, it’s best to repot more frequently.

There are three main reasons to repot:

You should use a very sharp knife or scissors to cut through the Conophytum pellucidum roots. The crown of your plant consists of four fleshy leaves. You can remove or cut them in order to prevent rot when you work with the roots.

The chances of rotting actually depend on how much sun your plant gets, not just moisture management. If they are in full sun it is important to water less, but if they’re in part or low light then it’s okay to keep them watered.

When you repot your conophytum, they will usually shrink away from the sides of the pot. If this is the case, gently squeeze or press on the sides of the container to loosen it up a bit before removing it completely. The plant will also contract when it’s dry, so make sure you water thoroughly after repotting to settle the conophytum in its new home. This will encourage it to re-root and give you a little more time before having to do it all again.

Conophytum pellucidum has a natural dormancy that MUST be respected. In the wild it lies dormant from October to April/May (start of autumn) and wakes up in spring.

Watering should be stopped in autumn (but if they are protected from frost, then that is not applicable). They go into this state of dormancy completely. During that time they prefer to stay dry and just rest for about four months. It is only when the days grow longer again that they wake up and start growing.

Spring is when it grows, but depending on the amount of rain in autumn, there might be no rain during spring so you have to water them regularly. Do not keep the soil constantly wet though because this will cause root rot.

Autumn is also a good time to divide your conophytum pellucidum, if you wish to divide them, and also to collect seeds because that is when they are ripe.

Small bell-shaped flowers often spotted with brownish lines, they open from pink to white. This species has a strong fragrance that is released early in the morning and after rain showers.

Conophytum pellucidum is a very slow-growing species that will stay tiny for many years. Only when it has found a good place to grow and is not disturbed by digging or water fluctuations, its growth rate picks up and the plant will slowly start to expand over time.

Till then, do not remove offsets as they will not set roots and it is better to leave them attached.

Do not feed the plant when it does not grow. This species stores water in its leaves, inflorescences, and even dead leaves that stay attached to the plant for a long time. When it feeds, the stored nutrients will get used up quickly and can result in leaf loss.

Conophytum pellucidum is generally considered to be safe for any animal that can eat it. It’s not poisonous, but it’s also not very nourishing so animals don’t seek it out as food.

Although they may chew on the plant occasionally, they won’t target it over other plants – it just doesn’t provide enough nutrition or water to make it worth the while!

However, even if your animal does chew on it, they probably won’t get sick. The skin of the plant is very bitter and chalky; this bitter taste is what makes it unappealing to most animals, but also means that it’s unlikely to cause any stomach troubles when ingested.

As long as you don’t eat it yourself, your animal will find conophytum pellucidum very unpalatable!

The USDA hardiness zones for this plant are 9 and up. This plant does well in warmer climates, as it’s native to South Africa.

Conophytum pellucidum is susceptible to many pests, diseases, etc. that are common for succulents. The most serious threat to the plant is root rot from overwatering or under watering, or not enough drainage/aeration in the soil mix. Signs of overwatering include soft-spongy plump leaves collapsed plant bodies, and yellowing or rotting of roots.

Signs of underwatering include shriveled leaves, wrinkled segments (especially at the tips) with wrinkles transversing almost to the apex (or top pointed part), and dried-up blackened stem tissue.

Pests include mealybugs, gnats, thrips, various scale insects (such as the cottony cushion scale), and nematodes.

Borers (grubs that eat stems) are another common pest for succulents. Repellant sprays may be used to kill them. Eriophyid mites can infest conophytum pellucidum, but they are not too harmful.