I have been thinking about the new Christmas cactus propagation, this is because my Christmas cactus is looking so sad. I am not sure why it just isn’t thriving the way it should in the pot. It’s been living here for a while now, and all of my other plants are doing really well.

There must be something wrong with the potting soil that was used to plant it in its current pot! So I ask myself: what can I do about this?

The first thing you want to do when your Christmas cactus doesn’t look like it’s growing as expected is to take a closer look at the soil around them (especially if they’re planted in pots). You may find worms or slugs hiding under leaves that have eaten away at roots because they’ve been exposed.

Sometimes, Christmas cactus just don’t like their pots and need to be transplanted for a while before they can recover, but it’s best to wait until the soil dries out after watering them so you know what the true condition of their roots is when you try digging them up.

You’ll want to put this plant back in its own pot or one that has fresh healthy soil if it seems like there might have been root damage from pests (especially slugs), and make sure not only do they have enough space for new growth, but also that some of the original compost/soil was added with them as well.

You may want to use an organic fertilizer or compost to help the Christmas cactus get back on its feet.

Christmas cactus propagation is the practice of taking cuttings from the plant and rooting them to create new plants. The easiest time to propagate Christmas cactus is in the late summer or early fall when they are well-established, but it can be done at any point during their growing season if temperatures stay above 50 degrees.

The first step in Christmas cactus propagation involves removing growth tips that have developed on the stem. Cut off these sections just below where leaves come out so as not to damage the rest of your plant’s root system with too much root loss.

Take care not to bruise or tear this area while cutting since it will help you identify which end should go into the soil.

Now take a container with moist, but not soggy soil and gently push the cut end of your Christmas cactus into it. If you are propagating more than one plant at once, space them out to prevent crowding so that they can all have enough room for roots to grow without getting tangled together.

Cover the top of the root ball with an inch or two of soil and water generously from above until all dry patches are gone. You may need to use potting mix instead of regular soil, if too heavy or compacted.

Keep this area watered well throughout fall while temperatures remain warm (above 50 degrees). The new plants should start growing in approximately four weeks since growth will be slow during these cooler months as long as you are keeping them adequately watered. 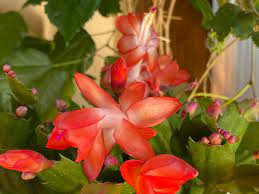 Christmas cactus planting is the practice of putting your plant in soil, either outdoors or indoors. Some people like to start their new plants from cuttings while others prefer to buy them already rooted and full-grown.

In order for your Christmas cactus to thrive, it’s important that they are planted with all of the same conditions as when they were first grown such as type of potting mix, water drainage, light exposure, and temperature levels, so be sure to research these requirements before choosing where you want yours to be planted.

If you’re transplanting existing plants outside, then wait until springtime unless there has been an unusually long warm stretch following winter weather in which case it may be possible now too.

When you’re ready to plant your new Christmas cactus, dig a hole in the ground that is deep and wide enough for it. You’ll want to prepare this area with plenty of soil so there’s room for roots to grow as well as make sure it has good drainage since they can’t tolerate being waterlogged or sitting in standing water because root rot will quickly set in.

Next, gently loosen the potting mix around your plant until its roots are visible then carefully remove them from their container by using a potted-up section at one end while maintaining the shape of the ball intact.

Place these into prepared soil without disturbing any areas where soil still remains on outer surfaces then cover with more soil and water generously.

You can also plant your Christmas cactus indoors if you prefer to do so by following the steps mentioned earlier minus digging a hole in the ground, choosing an area that has plenty of light exposure and is close to where it will be watered regularly.

How to root a Christmas cactus

We all know that the Christmas cactus, scientifically known as Schlumbergera, is one of the easiest plants to propagate. Simply cut off a section and stick it in moist soil. It will grow roots on its own so long as you keep watering it well.

The growth timing depends greatly on whether or not you live in an area that has frosty winters with higher than average rainfall levels year-round. For example, in Southern California where I live, we can plant our cuttings anytime from October through February which are the typical winter months without any serious risk of frostbite damage while colder regions would need to wait until November onward to do this.

Also, the houseplants can be propagated when they show signs of new growth in springtime (March-May). More importantly, any time you see flowers on your plants it means that it’s almost ready to propagate itself so make sure to pull them off and stick the stem section into the soil!

This ensures healthy roots will form at a more rapid rate because not all propagation methods create equally strong root systems – it only takes one year for a plant with flowering stems to grow from seedlings to blooming adults!

The Christmas cactus is traditionally grown indoors and prefers bright but indirect sunlight. It can be positioned in a south-facing window or near a west-facing window to get the light it needs.

However, if the plant begins to droop from too much sun exposure, it should not receive any more direct light for at least three days until it has time to recover.

This may seem like a lot of work just to grow some indoor plants, but remember that these little beauties will bring holiday cheer to your home for many years to come.

The potting mix should be well drained and lightweight. Use a cactus soil mix or use one part sand, one part perlite, and two parts of organic peat moss to create the perfect growing medium for your Christmas Cactus.

The key is to provide good drainage because soggy soils will rot roots quickly. If you have some time on your hands this winter, make sure that you thoroughly water in between each layer as it’s being mixed together so that there are plenty of air pockets; these will act as channels for excess moisture to escape from the root system when they become saturated with too much water during periods of heavy rain or watering sessions.

The Christmas cactus needs to be watered sparingly and about once every three weeks. The best time of day for watering your plant is early morning when there are no natural lights overhead so that you don’t disturb their dormancy as much with an abundance of water entering its roots system all at once on one particular day.

If your fingers start feeling a bit wet after touching the soil, then it’s safe to say that this plant needs more moisture than what has been applied in recent days.

The Christmas cactus usually thrives when the temperature is in the range of 60 to 70 degrees Fahrenheit. When temperatures start to fall below 50 degrees, it’s best to gradually move your plant indoors for winter potting and care.

Although they prefer cooler environments as opposed to warmer ones, these plants can’t survive cold drafts or chilling winds, so they need to be kept as close to a window or door as possible when brought indoors.

The Christmas cactus needs humidity that ranges from about 30% in the winter months and up to 50% during the summer months, so it’s important for them to have an area where they can dry out between watering. One of the best ways for this is to keep a humidifier nearby.

The Christmas cactus is a succulent and does not require regular fertilizing. If you are using the traditional soil, it may need to be watered more often, but if your plant is in an artificial container or specifically cacti mix, then there’s no need for extra fertilizer since they are very slow growers anyway.

Your plant should be repotted once every two years or when it becomes root bound by the pot. When this happens simply place your cacti in a container with fresh soil and make sure that there are plenty of holes for drainage to avoid rotting roots from sitting in water.

The Christmas cactus should be pruned whenever its new growth starts to crowd the space around it. Remove any brown or yellow leaves, water between each layer of soil as you mix them together, and then place your plant in a sunny window or near a door for winter protection (depending on how cold it gets outside).

The Christmas cactus is pest and disease-resistant with the exception of scale insects. Make sure that you use a soap mixture to remove these infestations before they spread any further, otherwise, your plant will be in danger from infection.

The downside is that young plants may need extra care when potted up so make sure not to overwater them!