Oxalic acid inhibits bacteria growth and helps to prevent rot in the soil around it. This makes Adromischus Marianae Herrei an excellent choice for people who are looking for plants that can survive on infrequent watering schedules!

The Adromischus genus of plants is often referred to as “Giant Crassulas” because they share many traits with the popular houseplant, including their tendency for slow growth and low water requirements.

This article discusses how Adromischus Marianae Herrei can be used in your home or garden! 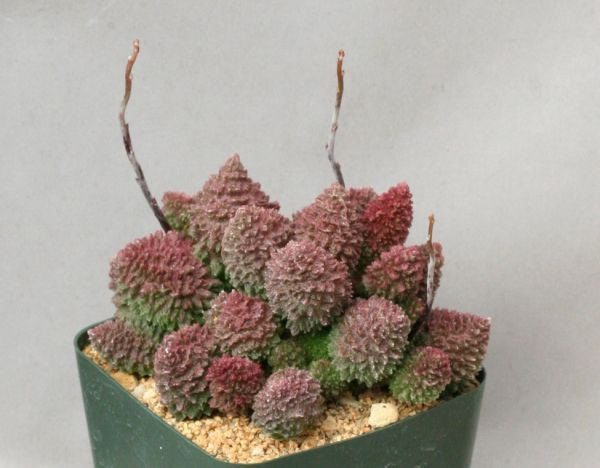 Adromischus Marianae Herrei is a cultivar of Adromischus marianiae, which was originally found in the Namaqualand region near Pofadder and Springbok.

Adromischus Marianae Herrei is native to South Africa. It grows on the lower hills and mountains of Namaqualand in Northern Cape, South Africa.

To propagate Adromischus Marianae Herrei, take stem cuttings with a sharp knife or by removing leaves from the base of the plant to use as propagation material.

-Remove any dried out soil on stems before planting them back into nutrient rich potting mix filled in a pot with an adequate drainage system.

-Water the seedlings in and allow it to dry slightly, before watering again once the soil has dried out.

Adromischus Marianae Herrei loves the light, but does not need direct sun. It can be grown in full shade to semi-shade with indirect bright filtered light.

According to the International Carnivorous Plant Society, this plant does well in light shade or partial sun.

Any place that gets bright sun for a few hours each day will be fine.

Adromischus marianae herrei prefers a sandy, well-draining soil. You can use mixed in some perlite for better drainage. It doesn’t have specific potting mix requirements but you should avoid mediums that are very dense and slow to drain. A good rule of thumb with succulents is not to make your soil too wet or too dry. If you use well-draining soil that has enough sand and perlite, then it should be okay to water when the top inch of soil is dry.

Water your Adromischus Marianae Herrei once every two weeks. The soil should be wet, not soggy, when you water it the first time in the spring or summer. Increase to weekly watering during autumn and winter due to drier conditions at that time of year.

Water your plant when the top inch of soil is dry. This means it needs at least two inches of water from a thorough watering, but you can wait longer between each time if necessary. If you see leaves dropping on your plant, it’s probably not getting enough water and needs more frequent watering.

It is advisable to fertilize once a month with diluted fertilizer (recommended dose of nitrogen).

The temperature will be okay in the normal room temperature, so it shouldn’t need to be heated or cooled.

The ideal temperature for Adromischus Marianae Herrei is between 50 and 65 degrees Fahrenheit.

Humidity level should be below 40%. If it’s too high, the plant will have a higher chance of getting mold. It needs to stay warm and dry at all times, so don’t put it in areas that are humid or moist.

Adromischus Marianae Herrei is a slow-growing succulent. The plant can be pruned to maintain size and shape, but it’s good to let the leaves grow longer before you trim them.

Adromischus Marianae Herrei can be repotted during their growing season. Wait until spring, when the plant starts to produce new leaves, and add compost only when the soil surface is dry.

3 tips for repotting your plant:

In winter, the plant will go dormant. During dormancy, Adromischus is completely dry and no water should be given. The leaves shrivel away but remain attached to the stems so it looks like nothing more than a stem with some dead tissue on top. If you’re not sure whether or not your succulents are dormant, just ignore the plant and water every few months if it starts to sprout new leaves.

Adromischus marianae herrei is a low-water succulent that produces waxy starburst flowers in pink and mauve. They are fragrant, with the sweet scent of rotten meat (due to its carnivorous habit), but they only bloom for one day on individual plants.

Adromischus marianae herrei is slow-growing, with an average height of 12-18 inches and up to 30 cm wide at maturity, about one inch per year.

The adromischus will grow to be around 18 inches tall with a spread of 12 inches wide. They reach maturity at three years and can live up to fifty or sixty years if properly cared for. The adromischus will need plenty of sunlight in order to thrive. This can be achieved by placing it near a window or under grow lights.

This plant has a toxicity level comparable to that of other succulents in its family. It can be harmful if ingested, so ingestion should be avoided by small children who might play with the plant.

It can cause dermatitis or general irritation, so handle with care.

Adromischus marianae herrei is a plant that can be grown in USDA zones 11 to 12. In areas with cooler climates, it will have no trouble growing outdoors as long as the winter temperatures are not below 45 degrees Fahrenheit.

It may also do well indoors if given lots of sun and warmth during the day, but it will need to be placed near a window in the winter months.

There are two main pests to watch out for when growing Adromischus Marianae Herrei, both of which can be avoided. The first is the scale insect and the other is slugs/snails.

Scale insects look like small little brown dots that will come upon your plant’s leaves or stems and they also leave a sticky secretion behind that causes the leaves to get a black fungus.

Slugs and snails will eat away at your plant’s tender roots, making it hard for them to absorb nutrients from the soil which can lead to yellowing of the leaves or even death if they go untreated.